skip to main | skip to sidebar

to anyone reading this

hello & welcome to my blog! such as it is. check out some stuff & FEEL FREE TO COMMENT (will be screened)

quiz: what star wars species are you?

Which Star Wars Native Species are you most like? 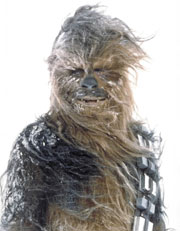 You are most like a Wookie! Tough, smart, and bad-tempered, you tower over almost any other creature. You are very loyal and trusting, and have a strong connection to family and friends.
Take this quiz!

the 30th anniversary of star wars was on may 25 & i forgot to post about it!
(bad star wars fan! bad!)
anyway, 30 years! it seems like last week it was the 20th anniversary. (yes, i saw the special additions. have them on tape too) they still hold up as cinema classics IMHO. something that will be tested on the afi 100 years, 100 movies special on wednesday.
can you believe that there are people on this planet who haven't seen star wars?!
here's the link to a story on a first-time star wars viewer

Posted by archersangel at 3:14 PM No comments:

Posted by archersangel at 3:36 PM No comments:

some things about me

i try to keep myself to myself (did that make sence?)
anyway, here's some stuff about me.

that's enough to qualify for "some" IMHO.
Posted by archersangel at 5:53 PM No comments:

you may have noticed a new addition to this blog; a picture under the header. at first i tried to get one from my imageshack account, but it didn't work. then i got one from my computer file (the one you see) but that puts the picture behind the words in the header, not under them like i thought. you can remove the words, but i guess that's only good if your picture has the words you want on it. AAAARRRRRGGGGG!!!! so then my brother did some arranging of the template & the result is what you see.
BTW that banner was made my my brother at my request because of stargate sg-1's "non renewal." cool, huh? i used it as my signature at the bboards of scifi.com for a while. i might change it at a later date.

Posted by archersangel at 10:05 PM No comments:

IT'S CRAZY!!!!
it's hot & dry. then cool & raining.
some places have too much rain. others don't have enough.
is this global warming or what?
Posted by archersangel at 8:38 PM No comments:

there are others who share this day with me.

i've been thinking about all that's happened in these 31 years, both major & minor. so, inspired by (& with apologies to) billy joel's we didn't start the fire, here's the list.

this is the best i could do with my memory. so if i forgot anything or got the order wrong, please forgive me.

the u.s bicentennial, carter is president star wars hits big. star trek on the big screen. hostages in iran, Regan is president. (most) hostages released.pope john paul II is shot, regan is too. the empire strikes back, indiana jones finds the ark, the jedi return. new coke is a bust. the space shuttle challenger blows. up Regan gets a second term. laser disk comes & goes. CDs become popular. baby jessica fall down a well. music goes with you thanks to the walk man. star trek returns to TV. bush gets elected, then goes to war in kuwait/iraq. there's a crash in the stock market. clinton is elected. indiana jones is on TV a short time. the internet starts to take over the world. phones go mobile. there's a movie about a stargate. clinton gets re-elected. the star war movies get special editioned. princess diana's car crashes. stargate becomes a series. john kennedy's plane crashes. they try to impeach clinton. star wars starts with the prequels. there's an internet boom & bust. george w. is declared president after many counts. 9-11 happens. cell phones get smaller & do more. george w. goes to war in iraq. much more music can go with you.star trek, after several series, ends on TV. music is on the 'net. comic books as movies. TV comes to the internet. music. industry sues about music downloads. (original) stargate on TV is over. plans are made for a star wars series.
Posted by archersangel at 10:41 PM No comments: